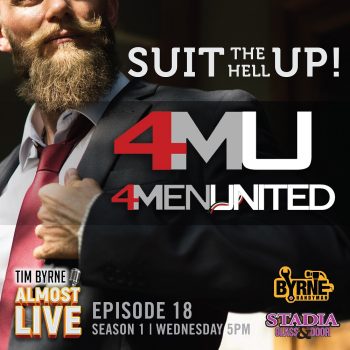 It wasn’t so long ago that our hero wandered into a clothes shop in Woodbridge.  It’s called 4 Men United.  It’s run by four brothers born in Canada to an Italian family with a long history in the fashion industry.  Tim likes the place. It’s a much more comfortable place to shop than your average men’s store, usually populated by a hungry horde of ravenous salesman.  It’s different at 4 Men. But Tim, being Tim, quickly wore out his welcome. You see, one of the brothers sports a rather large, dark beard. The kind of beard that any Italian man might grow.  But for Tim something else came to mind.

“Hey!  Nice terrorist beard!”  He said one day while trying on a pair of slacks.

“Hey!” said the offended owner.  “I have friends who are Muslim!”

Unfazed, Tim retorted that the owner was, in point of fact, an idiot.  He was not referring to Muslims. He was referring to terrorists.

Tim recounts this story at the start of this week’s episode which features, by some miracle, two of the brothers who agreed, against their better judgement, to appear on the show.

Alessandro and Marco are ridiculously young to be running a successful retail store.  Just 23 and 28 they learned at the foot of their father who worked in Canadian retail for decades.  After their dad’s retirement Ales and Marco, along with their older brothers Michael and Mario, struck out on their own.  The business has been operating for four years now. They’ve been incredibly successful. Just this last year alone they they did over 400 weddings.

The key to their success has been a focus on quality service.  That runs contrary to the rest of the industry which seems to focus on predatory sales tactics than actually giving the customer what they want.  All of this seems to completely bore Tim.

“Which one of the brothers has had sex in the store?” He asks.

Too professional to answer the brothers gently skirt the question.  Tim is undeterred.

“How many guys have you seen butt naked in the change room?”

Again, being professionals, neither Ales nor Marco will admit to bearing witness to any such thing.  They do, however, admit that there is a tendency among a certain kind of customer to strut around the store in their tighty whities while trying on clothes.  Most of those customers are named Tim Byrne.