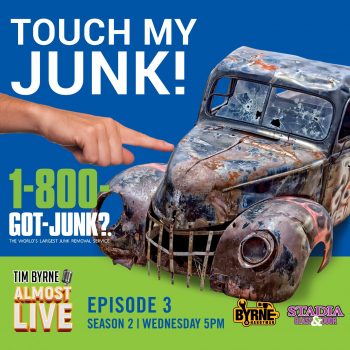 Tim has an absolutely phenomenal guest in the studio this week. Not only because he’s a great guy but because the company he works for is absolutely trouncing the marketplace these days. William Stefancic is the commercial sales manager with 1-800-GOT-JUNK. Will started with the company when he was a student working in the trucks. He worked his way through the ranks and took over commercial sales when he was barely in his 30’s. The company grew quickly by focussing on the residential waste removal. Will has been tasked with putting a new emphasis on commercial customers. That’s where Tim comes in.

Tim is pretty interested in all the weird stuff William has come across during his decade with the company. The list William provides definitely meets the definition of “weird”. You can only imagine the stuff you find crawling through basements, backyards and storage spaces. “You meet a pretty wide spectrum of humanity in this job,” Will says. “Hoarders, abandoned buildings and overgrown yards are a normal part of the job.”

The Toronto franchise of 1-800-GOT-JUNK is by far the largest in the country. It was started by Paul Guy who after meeting founder Brian Scudamore became the company’s first franchisee. Unfortunately, he was in Vancouver at the time and had to drive a waste removal truck all the way to Toronto to start the business. Will finds that story particularly inspiring. When he was first starting with the company, spending his days bouncing around in a hot garbage truck, he made the decision to do his absolute best at a job that other might have found beneath them. That hard work and dedication has paid off.

If you have an office filled with old office furniture or a project manager with storage lockers filled with people’s abandoned stuff Will is your man. He and 1-800-GOT-JUNK are aggressively courting commercial customers. Tim thinks commercial leasing guys are particularly desperate for dependable waste removal. “The property manager has a huge problem finding the right labour source for waste removal,” Tim says. For one price, William says, 1-800-GOT-JUNK will sort you out.