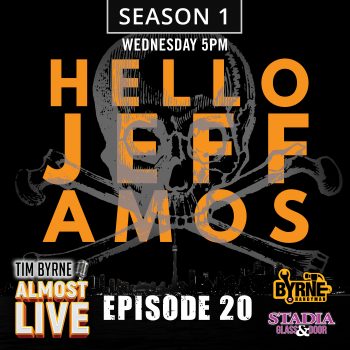 Tim heads back into the office and welcomes longtime colleague Jeff Amos onto the podcast this week.  Jeff has worked with Stadia for 13 years or as Tim likes to say “since Jesus was a cowboy.”  Jeff came on-board as a part time worker when he was in his early 20’s.  Tim and Jeff went to the same high school and they start this week’s episode sharing war stories.  Unsurprisingly, Tim was something of a difficult student. He politely told the principal to fuck off one day in Grade 12 and walked out the door, never to return.  Ten years later that same principal invited Tim to speak to students about succeeding in business. That teacher told him that he didn’t remember many of the thousands of students he taught over the years.  But he always remembered Tim Byrne.

Jeff has worked long enough installing glass that he’s injured himself on a number of occasions.  The most egregious example occurred when he was working at the Bay Tower installing a piece of half inch glass in an office partition.  The glass slipped broke and slammed into his arm. The doctors had to cut him open on multiple occasions to remove all the broken glass.  That wasn’t the only injury. Once in the Stadia shop a piece of glass slid right through his hands slicing open both his palms. He was working with a Stadia hero named Ronnie who Jeff was desperate to impress.  “Do you want to go to the hospital?” Ronnie asked. “Nope!” Jeff replied before taping up his hands with duct tape and finishing the work day. A lot has changed on the workplace safety front just in the last ten years.  The days of never wearing gloves or safety glasses are long gone.

“Have you ever been scared on the job?” Tim asks.

Jeff quietly nods his head before launching into a harrowing story about installing glass on the CN Tower.  They are 45 stories up and a gust of wind catches them on the swing stage.  The stage was blown 15 feet straight up in the air before crashing back down.  Everyone was tied in and secure and no tools were lost. But pants were definitely shit on that day.

Jeff is often asked why he has worked at the same company for so long.  It’s difficult to explain he says.

“Everyone is fucked up,” he says. “But everyone cares about each other and that’s impossible to find anywhere else.”

The culture is so strong at Stadia that employees who stop working with the company almost always eventually ask for their job back.  If you are not as happy to come into work on Monday as you are when you leave on Friday you’re working at the wrong place.