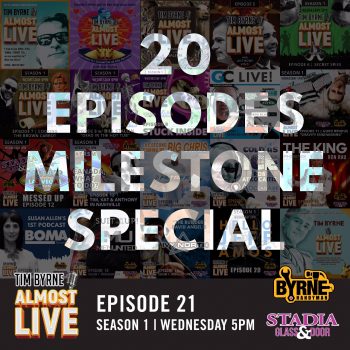 Tim celebrates Season 1 with a retrospective episode featuring some of the funniest, dumbest and most offensive clips from the last 20 episodes.

The episode features perhaps the most important conversation ever featured in the podcast.  Back in Episode 7 discussed where the best bathroom can be found in downtown Toronto.  Tim is immediately interested in this line of conversation having visited every public washroom in the GTA over the last 30 years. Tim excitedly describes Crown Property Management’s bathrooms near the airport which have alcohol wipes that can be used to wipe down the seat prior to use. The pair then debate which building has the best washrooms in the downtown core. For the longest time Tim used Atrium on the Bay because for years the loading dock manager would let him use the second floor washrooms. (This was before the age of the security guard, of course).

Next we return to one of the more disturbing tales ever spun on the podcast.  In Episode 8 Tim welcomed his old mentor Bill Stallon onto the podcast.  Together they recounted one of their more memorable adventures together at Beaver Valley. The group retired to a hot tub after a large steak dinner. Because no one had swim trunks that meant everyone was naked. Not having anything to drink one of the hosts offered a full bottle of XO Cognac.  After drinking the entire bottle Bill was now soundly asleep, happily bobbing in the tub.  What followed next was a heroic attempt to move the much larger Bill out of the Tim.  After dragging Bill like a corpse across a frozen threshold they left him in the laundry room. (Covered up for modesty’s sake.)

Along with these classic tales the blooper episode also features Anthony Vinzi noting that Tim looks like a vagrant and the story of Tim’s insane attempt to break the sound barrier in a brand new Porsche.  It’s been a great first season!  Hope to see you when season two gets underway in the fall!