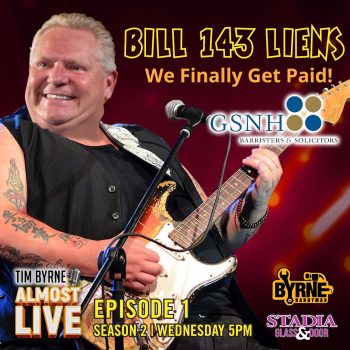 Things are about to change in the building trades. The Ontario government has decided to radically overhaul the Construction Lien Act. The first set of changes came into effect July 1st. Tim decided he needed a crash course and asked lawyer Olga Morozova to join him for a chat. Olga has worked for all levels of the construction business and knows what’s about to change.

One of the biggest changes is that, for the first time, the government mandates time frames for payment. Owners must pay within 28 days of receiving an invoice. Olga says the old days of contractors blaming the owner for lack of payment are over. Getting paid your holdback is another big issue in the trades. Because you can lien the holdback Olga is telling all her owner clients to pay that money within 60 days.

Tim wants to know why screwing over subcontractors has become so common. Tim thinks the big contractors and owners have systems in place to stop or slow payment. He once had someone inside an accounting department tell him that it was policy to reject 10% of all invoices. A lot of subcontractors are barely hanging on because giant firms aren’t paying their invoices on time. Olga says she sees this all too often. She says your first call should be to your lawyer.

Tim has only placed about three liens in 30 years of work. He’s one of the lucky ones. For a lot of companies liens are a common part of the business. The changes to the law allow subcontractors more time to “preserve” and “perfect” the lien. Olga explains those definitions to Tim and reveals why they are so important.

The changes to the act are long overdue. The last time the law was updated was over 35 years ago. Making it easier for subs to actually get paid on time will be a huge boon to the industry. Only time will tell if the law will really make those changes.