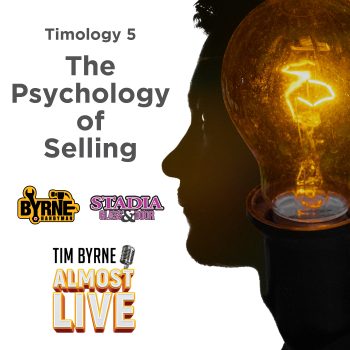 Selling is hard.  It’s exhausting physically.  It’s exhausting mentally. It’s not for the faint of heart.  Tim tries to drive that message home this week when he is once again joined by his sales guys Dylan and Andy.  It’s all about the psychology of selling and why the hardest part of the job is dealing with what’s going on in your own head.

The episode starts with a conversation about embarrassing yourself on the job.  You have to be prepared to do it. Tim shares just such a story. Earlier this year he met with the head of one of Stadia’s biggest clients.  The guy is a major power player in Ontario construction. He’s way too busy to be taking meetings with Tim. Yet Tim, somehow, managed to get just such a meeting.  It was a hot day. Really hot. And Tim decided to where one of his nicest shirts. It was a purple shirt. Arriving early Tim sat on the patio directly facing the scorching summer sun.  By the time the big shot arrived Tim’s purple shirt was soaking wet. The pit stains stretched down to belt. The big shot was clearly weirded out and he hasn’t taken Tim’s call since.

The point of that horror story is that you have to be prepared to look stupid.  “If you’re not putting yourself outside of your comfort zone every day you’re not going to make it,” Tim says.  It’s going to take a while to get comfortable with yourself in the job.