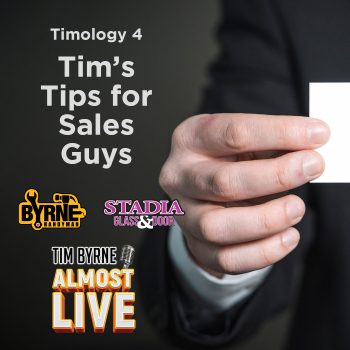 Tim needed an audience for this week’s episode so he invited Stadia sales guys Dylan and Andy into the studio.  The three had just attended a sales seminar together.  There was plenty Tim liked about workshop but, naturally, there was also a lot he disagreed with.  So he invited the boys to join him for a post-mortem.

Tim says that a good salesman focuses on what the customer wants.  People in sales too often worry about what they want.  Dylan has been working sales for Stadia for 2 years while Andy has just started working for the company.  Tim says there are about 5 tiers of experience that a sales guy will move through during his career.  In the first 3 months of a sales career everyone is totally focused on making as much money as possible.  The problem is that creating new clients often means giving away free favours.  The problem is a new sales person has no favours to give away.  It’s all about who you know when it comes to favours.  It takes at least 2 or 3 years to get there.  Those first 3 months are a long haul.

Sales workshops always emphasize the importance of knowing everything about the product that you’re selling.  Tim thinks that’s a lot of horseshit.  You don’t need to know much about your product.  You do need to know a lot about people, the resources you have around you and how to make them fit together.  If you can put a sentence together and communicate an idea in 30 seconds or less, you’ll do just fine.  In the first level of a sales career you need to learn how to communicate, how to pick-up on social cues and begin to build your network.

As you go from level 1 to level 2 the most important thing you can do is try to gain knowledge.  That might sound easy but it’s harder than it sounds.  Most people are asking questions not to learn something but to defy authority.  Especially in a male dominated industry like construction there is a lot of bravado.  Try and shut-up and listen once and a while!  You’re going to have a meltdown around 9 months in when you realize you don’t know what you’re doing.  Read, listen to podcasts and watch YouTube videos constantly.  You have to be self-aware and be willing to recognize what you have to improve.