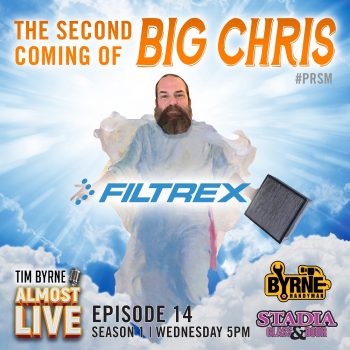 It’s been a strange week in Nashville.  The PRSM conference is a lonely place for a Canadian boy like Tim Byrne.  Shunned by his American counterparts he’s been left to wander, listlessly through the dizzying array of display booths.  The PRSM crowd are a grim lot. Ashen-faced they stagger through the crowded hall with frozen smiles smashed across their dull faces. Tim starts to fear for his very soul.  Luckily, redemption is at hand. For there is one man that strides across this ocean of despair like the savior himself.

Indeed it is.  Or rather it’s Christopher Blount.  President of Filtrex Services.  Chris is an old friend of Tim’s and agreed to appear on this edition of TBAL.  He earned his nickname because of his large stature and even larger beard. Being a generous soul he’s forgiven Tim for coining that hateful moniker.

Like any divine being Chris has been gifted with the power of prophecy.

“I can predict who what companies are going to make it and which ones won’t.” He says.

Everyone knows and likes Chris at PRSM but that sometimes doesn’t translate into sales.

“Is it because your afraid to sell yourself?” Tim asks?

At his first PRSM conference years ago Chris went all out.  He brought in Harley’s for prospective clients to ride. He hosted parties.  He shook every hand. And he didn’t get one piece of business. That was a big lesson for him.  He has since learned to let his technology speak for itself.

Unsurprisingly, Tim digresses from this important conversation about business.

“You’re one of the sweetest men I’ve ever met,” he says. “But you’re scary as shit from a distance.”

Chris is big and tough looking.  But it took a long time to try and portray himself in a more friendly way.  Stopping drinking was a big part of that. But so was not caring so much about what other people thought of him.

The conversation eventually drifts into politics.  Tennessee is deep Trump country and Chris is an avowed Republican.  He’s taken a lot of shit from his Democratic friends for voting for Trump but he now regrets it, admitting that he is a total embarrassment.

The episode wraps up with a discussion about the horrors of Ron Jeremy the importance of choosing the right lane.