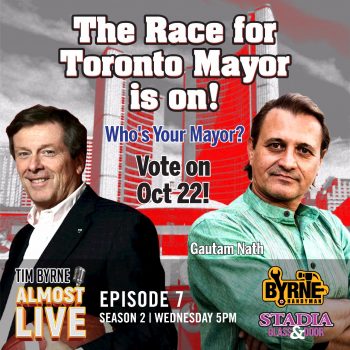 These are exciting times in Ontario.  Towns and cities across our fair province will be hiring new mayors in October.  The political landscape has changed a lot over the last four years. Donald Trump has really shook things up.  I don’t like everything that Trump does but he has made every stand-up and have an opinion. I think there’s a real benefit  to that. Over the next few weeks I’m going to be speaking with several mayoral candidates. I want find out where they stand on the issues that I’m really passionate about – namely small business, taxes and PC culture.

Today, I’ve invited Toronto mayoral candidate Gautam Nath to join me in the studio.  This is the first time Gautam has ever run for elected office. It’s expensive to enter politics and Nath has depended on volunteers to help his candidacy.  Nath worked in finance for big multinationals for years and wants to bring that expertise to local government. “The mayor is in the best position to make sure things happen for the people of Toronto,” he says.

One of Tim’s biggest complaints about the Wynne government was her decision to raise the minimum wage.  He thinks that if you give someone a handout it diminishes their incentive to work. Gautam thinks there is an analogy to the way Canada’s economy has operated for years.  For too long, he says, Canadians depended on exports to the US. The 2008 recession made us realize that we have to diversify our markets. It made us work harder to compete in a global market.

So what about John Tory?  He’s been everywhere over the last few weeks but, in Nath’s eyes, totally absent for the previous four years.  Tory was elected on the promise of creating the SmartTrack.  “We’re still waiting to see where the smart starts and where the track begins,” Nath says.  Nath believes it’s time for a change and voters are hungry for something that’s real. We’ll find out when Torontonians go to the polls on Oct 22.