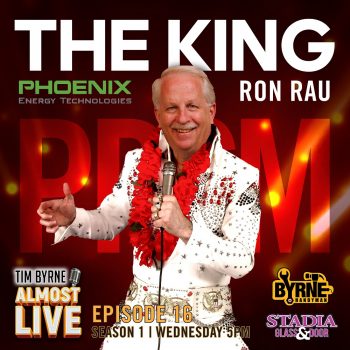 TIm is coming to you one last time from the Gaylord Hotel in beautiful downtown Nashville.  The Gaylord is the site of this years PRSM conference but Tim just can’t get over that name.

“I can’t even handle that name.” Tim says at the start of this week’s episode.

Tim’s co-host this week is Paint Chips otherwise known as Anthony Vinzi from Promain.  Paint Chips was awarded one of Tim’s famous nicknames after being interviewed on TBAL.  Anthony was so boring it was like eating paint chips thus earning his latest moniker.

Today Tim has invited Ron Rau to join him on the podcast.  Ron is an old friend and together he and Tim have been through a lot together.  Career changes and divorces are just two examples. Though Ron is quick to point out that he hasn’t been divorced yet.  Tim asks Ron how long he’s been married.

Tim invited Ron on the show to talk about something most of us will experience in our career.  Losing a job. Ron worked at the same company for nearly 20 years. They were in the middle of restructuring and Ron had been charged with laying-off many of his staff.  That was difficult. Then he was called into his bosses office and told he was being let go to.

Tim knows that Ron lived and breathed his job.  Getting the axe was incredibly difficult. Ron’s former company asked him to work for a few weeks more.  But then he found himself with no place to go. He was used to speed. Going fast all the time turned into very, very slow.  That took some getting used to.

Tim shifts the conversation to ethics in the retail business.  When Tim was doing work for Ron’s former company he says he worked harder than for any other client.  The reason for that was simple. It wasn’t for the money. It was because they were friends. The norm in the industry now is that vendors don’t have personal relationships with retailers.  Some retailers forbid contact at all. Companies have put in those rigid rules to prevent anyone being “on the take.” That has made the entire much more impersonal.

“I’m not sure if retailers know what they’re buying half the time!” He says.

It’s become so extreme that showing up at a job site with a box of doughnuts is totally verboten.  Tim thinks it’s just about basic manners and politeness. Tim’s Mom taught him to show up at a friend’s house with a gift.  It’s basic human decency.