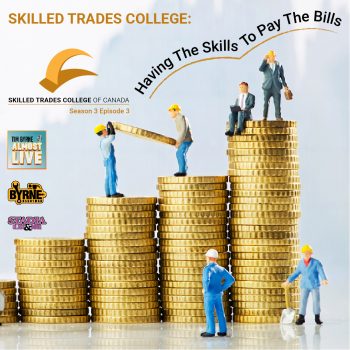 I hated school.  I was dyslexic and wrote backwards.  I was always made to feel like an idiot.  When I was 15 I left and never came back.  It took me years to realize that I wasn’t stupid.  I eventually came to realize that the problem was with the school – not me.  I was thinking about that recently while touring the Skilled Trades College campus in Vaughan, Ontario.  My friend Ralph Cerasulo founded STC a decade ago to provide a place for young people to get the skills they need to succeed.

When I was a kid there was a “trades” school for teenagers that was universally regarded as the place where the dumb kids went.  In some ways that perception of the trades has never really went away.  A university degree is the holy grail for many parents who push their kids into getting one no matter the cost.  But the irony is the best way to become one of the top income earners in this country is to enter the trades.  Kids with  four year bachelor degrees often find themselves unemployable and laden with debt.

In this episode Ralph and I talk about why the education system is letting kids down and why the trades are so important.  It’s one of the best conversations I’ve ever had.  And, I think, it’s one of the most important.  STC is an amazing place and I think you’re going to be as impressed with it as I am.