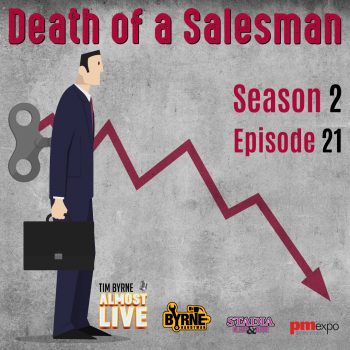 Being a salesman sucks. Especially if you’ve just started in a new territory or with a new company. By month six you’re ready to quit. You’re depressed. You’re frazzled. You have no one to turn too. Now you do. On today’s episode Tim shares how you can get over the hump and really succeed.

He’s joined this week by Andy Rutledge, a relatively new salesman at Stadia.  He is in the midst of dealing with the desert that is month six at a new sales job.  Tim provides some counsel to his younger counterpart.

The problem is that success for a sales person is hard to see in the moment.  Success means money and even if you’ve been making some deals you won’t see the fruits of that labour for at least another three months.  That means you have to have a robust sense of self.  You have to believe that you’re succeeding.  Otherwise the voices in your head are going to take over an make your life miserable.